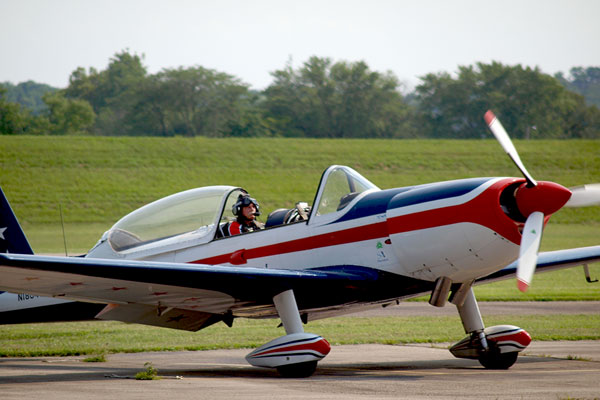 The Moraine Airpark on Clearview Road is one of Moraine’s hidden gems. One historical special event that will take place at the airpark in 2019 is the EAA (Experimental Aircraft Association) Sunday Funday Fly-in, the nation’s longest running same day fly in.  This year celebrating its 60th anniversary, the Sunday Funday Fly-In will expand to two days of aviation excitement on May 4 & 5.  Specific program events will be listed in the May Moraine Messenger and on the City of Moraine website.  The tentative program includes experimental, regular and vintage airplanes on display, food & refreshments, aviation booths and tentatively an airshow.

The Moraine Airpark moved from its original Lamme Road location in Miami Township to Moraine in the mid-1950’s.   Through the years the Moraine Airpark has hosted great events and many famous people have flown here.  Here is a look at some colorful airpark facts:

Phil Donahue did a TV show on Moraine’s parachute club.

Moraine Airpark is the first, oldest and longest running seaplane base in the world.

The Wright Brothers began their hydroaeroplane (seaplane) experiments along the Miami River in Moraine and West Carrollton in 1912 and 1914 with over 100 flights.

The Moraine Airpark has trained thousands of pilots over the years, many who have become airplane pilots and military airmen.

Moraine has the second largest flight school in the State of Ohio.

Moraine was the site of the first female parachute stack during an airshow.  They were called the “Falling Angels”.

The largest group of Waco biplanes in the world were based in Moraine.  In the 1960’s they were called the “Glue Angels”.

Bob Wagner tested the first Citabria aircraft on EDO floats on the Miami River in the early 1970’s.  This popular sport plane lead the way with affordable float plane flying and aerobatics.

Many rare aircraft including one-of-a-kind aircraft have been based at Moraine including the Champion Lancer, many Waco’s, the Luscombe Phantom, the Riley Rocket Swept Tail Cessna 310 and many more.

The Waco Taperwing based in Moraine was featured in the 1988 movie, “Pancho Barns”.

In 1985, Moraine’s 4th of July Airshow was listed as the 3rd oldest airshow site in the world.  The July 4th Moraine airshows lasted 30 years.

The world’s top airshow performers have danced the skies over Moraine over the years.

***ROAD CLOSURES*** The Autism 5K is this Saturday, May 8. There will be temporary road closures as the race makes it way along the route. The race begins at 10:00 a.m. for runners and 10:15 a.m. for walkers and should be concluded by 11:30 a.m. In addition, the side parking lot of the PRC will be closed. Patrons are asked to use the front parking lot. ... See MoreSee Less
View on Facebook
· Share

The Montgomery County Water Services drop box in front of the Moraine Municipal Building has been repaired and is available for payment drop offs. ... See MoreSee Less

Annual Garage Sale is April 30-May 2! - The City of Moraine

Streets Division - The City of Moraine

The Department of Public Service consists of two divisions. These are Streets and Parks. Each division’s main purpose is to
View on Facebook
· Share

***ROAD CONSTRUCTION*** Norfolk Southern will be closing the Main Street railroad crossing April 27th-April 28th, 2021 for paving work on the crossing. This crossing is located between Dryden Road and Springboro Pike. The signed detour will be Dryden Road, to Dixie Drive, to Springboro Pike. ... See MoreSee Less

Come out to Wax Park tonight 04/23 for the opening ceremony.Deputy Mayor Teri Murphy will be throwing out the 1st pitch.Even if you do not have a child in baseball, please feel free to come out and watch.Don’t forget that tomorrow evening is the WCBC Opening Ceremony! Come out to show your support for our athletes and enjoy some food and fun! ... See MoreSee Less

DRUG TAKE-BACK; On Saturday, April 24, 2021, from 10am to 2pm we will be in the front lobby of the Moraine Municipal Building, 4200 Dryden Rd., to collect unused and unwanted prescriptions. ... See MoreSee Less

Pinnacle Road will be closed between Vance Road and Pinnacle Ridge Blvd on Wednesday, April 21, 2021 from 7:30am to 4:00pm for a storm sewer installation. Traffic will be detoured to Main Street and Vance Road. ... See MoreSee Less

National Volunteer Week is this week and is an opportunity to recognize and thank volunteers who lend their time, talent, voice and support to our City. To see how you can help, visit ci.moraine.oh.us/volunteers/ ... See MoreSee Less

Volunteers - The City of Moraine