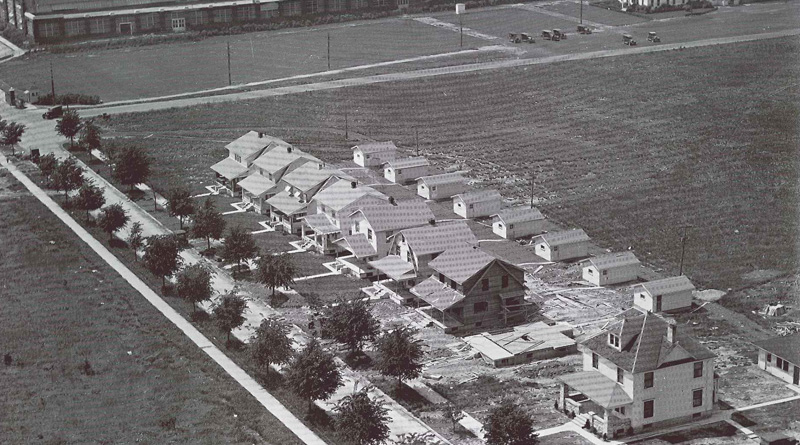 In 1917, fourteen homes were built on Edison Avenue (now Blanchard Avenue). Gas lines were installed , the street paved and sidewalks, curbing and gutters provided. The houses were occupied by workers at Dayton-Wright Airplane Factory.  The homes appear to be Sears Roebuck and Company mail-order homes.  The homes were ordered from catalogs and were shipped pre-cut, numbered and blueprinted to fit together and each home cost from $650 to $2,500.

At some point Edison Avenue, named after Thomas Edison, was changed to Blanchard Avenue.  The mystery was when and why was it changed and who was Blanchard?

The answer is Thomas Blanchard, called by many as the “father of the assembly line”.

Thomas Blanchard (June 24, 1788 – April 16, 1864) was an American inventor who lived much of his life in Springfield, Massachusetts, where in 1819, he pioneered the assembly line style of mass production in America, and also invented the major technological innovation known as interchangeable parts. Blanchard worked, for much of his career, with the Springfield Armory. In 1825, Blanchard also invented America’s first car, which he called a “horseless carriage,” powered by steam. During Blanchard’s lifetime, he was awarded over twenty-five patents for his creations.

He was born in Sutton, Massachusetts.  Blanchard was a shy child with a bad stammer – ridiculed at school. But he had fine mechanical talent. His Eureka moment came when his father took him to a blacksmith’s shop. Forming red-hot iron into horseshoes looked like magic. He tried to replicate the feat at home and failed. So he made more trips to the smithy, where his real education began. One day he announced to his father that he meant to be a mechanic, instead of a farmer.

Blanchard had a fondness for mechanical employment, and was associated with his brother in the manufacture of tacks by hand. This process was exceedingly slow and tedious, and his first machine, made and patented in 1806, was a mechanical tack-maker, which could fabricate five hundred tacks per minute, each much better than tacks made by hand. He sold the rights to his machine for $5,000.

Blanchard then turned his attention to gun barrels, and invented a machine tool that streamlined the process of their manufacture. Hired by the Springfield Armory during its construction, Blanchard finished the machine in 1822.The machine turned and finished gun barrels in a single operation; the octagon portion of the barrel was finished by changing the action of the lathe to vibratory motion. This invention was afterward extended to the turning of all kinds of irregular forms.

He also developed a copying lathe that traced a model to turn gun stocks, producing the desired contour automatically (1818). The copying lathe began being used to make shoe lasts (forms) in the 1850s. By being able to accurately reproduce lasts it was possible to make shoes in standard sizes.

Turning his attention to transportation, Blanchard invented a “steam wagon” before the introduction of railroads in the United States, and in 1831 created a powerful upriver steamboat that was used on the Connecticut River and the West, both of which he invented and patented in Springfield, Massachusetts. In 1851, he designed and created a machine that could bend dense and strong wood.

Blanchard also constructed machines for cutting and folding envelopes at a single operation.

In 1849, Thomas Blanchard invented a machine for bending wood that was used to make plow handles and larger shapes for ships. In his later years the inventor built steamboats and then moved to Boston, where he served as an expert on patents.

Thomas Blanchard was a key player in industrializing America. His impact on the standard of living of ordinary Americans was huge. Looking at the life of little-known Thomas Blanchard, we gain an inking as to just how an industrial America emerged so rapidly out of Colonial outposts.  And that is the history of the man whom Blanchard Avenue in Moraine is named.