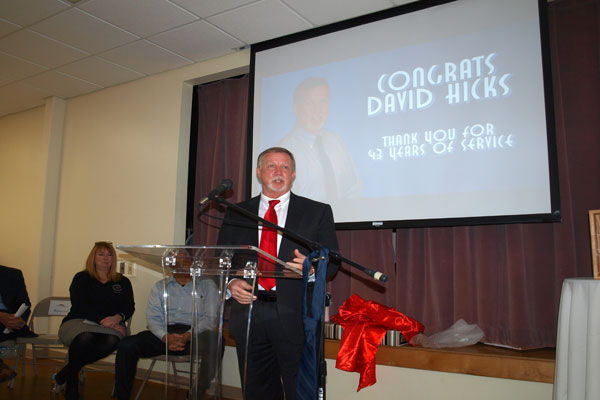 David Hicks began his career with the City as a Police Officer in 1975, was promoted to Chief of Police in 1993. During his time in the Police Division, he was instrumental in changing the culture and vision of the Moraine Police Division; his basic philosophy was proactive as opposed to reactive policing.

In 2001, Dave was appointed Acting City Manager while continuing to serve as the Chief of Police and in 2002 he was appointed as City Manager and Director of Public Safety. He oversees all functions of City government with strong leadership, vision and insight. As City Manager Dave has been responsible for many projects that have revitalized the City and has addressed quality of life issues for residents. He always has the citizens’ best interest at heart. Some of these projects include:

When Montgomery County announced they were leaving their facility on Lamme Road, adjacent to two outdated and troubled mobile home parks, he persuaded City Council to acquire that land and the trailer parks and built a new single family housing development (Oak Pointe).

Dave led in dealing with the issues related to the assembly plant closing, first organizing the regional bus trip to G.M. World Headquarters and then lobbying “everyone” regarding the disposition of the vacated plant, which as we all know is now home to Fuyao. He lobbied Senators Brown and Voinovich, Representative Mike Turner and Lt. Governor Lee Fisher, Motors Liquidators, the RACER Trust and others, to reuse this property and adjacent properties rather than allow scrappers to buy and salvage the buildings. Dave cold called Stu Lichter, chairman of IRG, who eventually bought the property.

Dave established Zero-based budgeting for the City which means all expenses must be justified and he introduced Interest Based Bargaining for the City’s unions which reduced the number of negotiating sessions by more than 50% and reduced staff and bargaining unit members’ time, during the economic fall, he organized a Citizens Budget Advisory Committee which was critical as across the board expenses were cut. Generally, his approach to managing the City tracked the proactive approach he introduced in the Police Division.

***ROAD CLOSED*** Blanchard Avenue will be closed between SR 741 and Kettering Blvd effective IMMEDIATELY until 3pm today due to a tree down. The street department will be closing a block of Blanchard to remove the tree. ... See MoreSee Less
View on Facebook
· Share

Our cats got out and we found poppy but can’t find Leroy ( whom is diabetic) and needs his shots and lots of water . He very timid outside but very friendly at the same time. Collar has address and number . Please pray for him to be found and returned before he goes in Diabetic shock or worse  is wearing a purple collar ... See MoreSee Less

The Parks and Recreation Department will bring fun and games to a park near you this summer as part of its mobile recreation program – Rec & Go! The goal of the Rec & Go program is to get kids and families out of the house by providing them with a wide variety of recreation activities. This free program will take place in Moraine and will be staffed by parks and recreation personnel who will lead organized activities for kids.Tuesdays at Ora Everetts Park 12-2pmThursdays at Cobblegate Square 12-2pm ... See MoreSee Less

The time for summer fun is officially here and we are ready to celebrate with our Summer Kickoff on June 12 at Deer Meadow Park. An afternoon of games and activities for all ages. If you ever needed an excuse to celebrate summer and soak in some sun, we've got you covered. ... See MoreSee Less

COVID-19 UPDATE/RE-OPENINGWe are reopening a variety of programs and activities to serve our community, from Preschool to Seniors, at both the Payne Recreation Center and the Gerhardt Civic Center. Beginning June 2, 2021 the Payne Recreation Center will operate at 100% capacity for rentals, fitness and childcare. Drop in passes will be reinstated for anyone who wishes to visit the PRC for the day. The current hours of operation are Monday-Friday 7-11a & 3-7 p and Saturdays 9a-1p. Beginning June 2, 2021, the Gerhardt Civic Center will operate at 100% capacity for rentals and programs. The current hours of operation are Monday-Friday 10a-4p and Saturdays 12-6 pm. The Game Room will be open for children with parental supervision. Additionally, our community events are coming back beginning with our Summer Kickoff on June 12 at Deer Meadow Park and our Star Spangled Boom on July 4th at Wax Park. This year we are excited to introduce a new low-profile firework show, with the best spot to view the display being at Wax Park. For more information on the Star Spangled Boom visit ci.moraine.oh.us ... See MoreSee Less
View on Facebook
· Share

***WATER WARNING*** Due to the fire at the former GM Paint Shop, water may appear brown or rusty for some residents and businesses. The water is safe, however, if you need Iron Out please contact the Fire Division at 937-535-1132. ... See MoreSee Less
View on Facebook
· Share

The City of Moraine would like to thank the men and women who have who have lost their lives in service to their country, this is what Memorial Day means to us. ... See MoreSee Less

Have you signed up for the Cardboard Boat Regatta at the Summer Kickoff? Make sure to register (register at ci.moraine.oh.us/cardboard-boat-regatta/ ) ... See MoreSee Less

Design and build a person-powered corrugated cardboard boat capable of racing a 50-yard course. Boat design is left to the
View on Facebook
· Share

Please contact the Police Division at 937-535-1166 if you have any tips on this missing person.***UPDATE***Brandy Morgan was found yesterday afternoon and returned to her family. Thank you to everyone who took to the time to share and pass along information. We would not have been able to resolve this case so quickly without your help. PRESS RELEASE - MISSING PERSON; On May 20, 2021, family members of Brandy K. Morgan reported her as a missing person from her residence in Moraine. Brandy was reportedly last heard from on May 2, 2021, and may have been in the Tipp City or Troy area at that time. It is unknown what Brandy was wearing or who she was with. She was not believed to have been driving a vehicle. Brandy is 5-01 and weighs 110 pounds. Brandy has three young children, who all miss and need their mother. If anyone has been in contact with Brandy or knows of her whereabouts, please call the Moraine Police Department at 937-535-1166 or your local police agency. ... See MoreSee Less