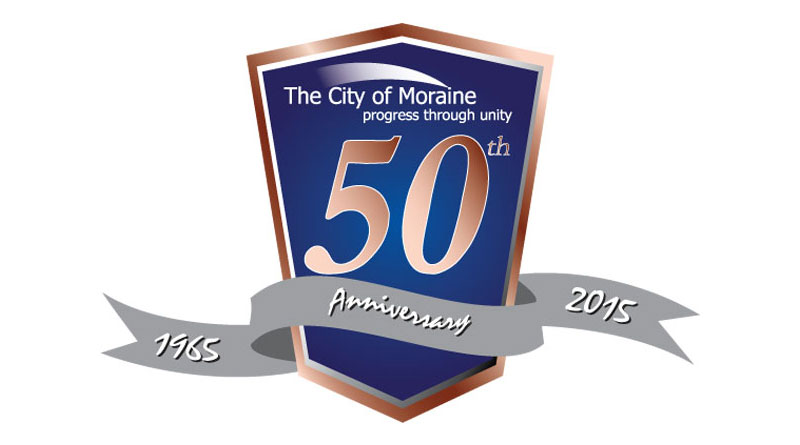 The City of Moraine celebrated its 50th Anniversary (1965- 2015) in 2015 with a yearlong series of special events, project completions and activities which added to the quality of life in Moraine.

The 50th Anniversary Planning Committee partnered with businesses, churches, clubs and other groups to accomplish many of the programs and events. If you missed out on the fun, below is a recap of events and accomplishments.

A challenging twenty question 50th Anniversary Trivia Quiz ran from March through June featuring questions on Moraine history, places and historical figures. Hundreds of people participated with nine individuals correctly identifying 19 out of the 20 questions. After a drawing for those tied, the winner was Christine Platt who won an overnight stay at the Dayton Marriott Hotel and tickets to a Dayton Dragons baseball game.

The Annual Easter Egg Hunt was not a new event but the 50th Anniversary Committee enhanced the event with additional prizes so that there were “50” prize golden eggs out of the 6,000 eggs that the over 600 children sought. Great prizes included five bicycles, skateboards, scooters, soccer balls, basketballs and of course, lots of baskets full of candy.

Since Moraine is blessed with several natural resources such as the Miami River, great parks and an airport, the planning committee was encouraged to make them part of the 2015 events. Each venue was utilized as one event was held on the Miami River, many project completions and several events were held in the parks and four special events were held at the Moraine Airpark.

On May 3, the Moraine Airpark hosted the Sunday Funday Fly-in, the longest running continuous day fly-in in the country. The weather was perfect and over 300 planes participated. The event featured aircraft-related booths, Wright Seaplane Base educational booth, great food and the 50th Anniversary Committee provided dash plates for the first 50 pilots.

Also on May 3 a High School Rowing Regatta was held on the Great Miami River. Several competitive high school teams participated (including the Dayton Boat Club located in Moraine) with special 50th Anniversary Participation Awards for the rowers.

On May 29-30 the 50th Anniversary Celebration was held with a two day festival at Wax Park featuring food booths, food truck rally, bingo, carnival rides, family games, face painting, kids crafts, pet show, craft booths, balloon sculptures, pie baking contest, horseshoe tournament, kids candy hunt, historical displays, car cruise-in, musical entertainment and a parade. Mayor Elaine Allison hosted the Opening Ceremonies where Moraine Citizens of the Year for the past 27 years were recognized and the 2015 Citizens of the Year, Jerry and Delana Dunn received their award. Musical headliner on Friday evening was Joe Mullins & the Radio Ramblers and on Saturday night The Danger Brothers. The parade was the largest and best ever with a wide variety of floats, bands, walking units, dignitaries and antique cars as participants wound their way from the Municipal Building west on Main Street to the festival site at Wax Park. Over 60 units participated on a bright sunny day. Parade Grand Marshals were longtime Moraine residents Dave and Rosie Miller. Parade awards were presented in ten different categories for outstanding entries.

During the summer teens in grades 5-12 took part in the “Moraine Writes Essay Contest” sponsored by the 50th Anniversary Committee and the Kettering-Moraine and West Carrollton branches of the Dayton Metro Library. Youth were to write a 250 or 500 word essay on some aspect of Moraine history. The winner was Cameron Gamble an 8th grade student at West Carrollton Middle School who wrote an essay on the 1917 Dayton- Wright Aircraft Company on Springboro Pike. She received a free airplane ride courtesy of the Moraine Airpark and a free pilot log book courtesy of the Wright Seaplane Base Inc. organization.

The Independence Day Celebration is always a fun time in Moraine. On July 3-4, thousands of people enjoyed City sponsored activities including a 5K Run, food truck rally, amusement rides, game booths, food booths, youth and teen amateur talent show, which concluded with a spectacular fireworks show. Musical entertainment headliners included Christian pop artist Adam Cappa and country artist Alexis Gomez who was a finalist on American Idol Season 14. The 50th Anniversary Committee gave out t-shirts, water bottles and key chain flashlights at the event and enhanced the activities on July 4 by sponsoring an afternoon air show. The eighty minute 50th Anniversary Moraine Air Show featured a patriotic pro skydiving team carrying an American flag and a half dozen airplanes as the stunt pilots performed their breathtaking stunts and skills above the Moraine Airpark to the delight of an enthusiastic crowd.

On July 31 the Moraine 50th Anniversary Fishing Derby was held at the beautiful nine acre pond at Deer Meadow Park. Twenty-one fishermen participated in the derby which was recently stocked with 400 bass and 200 bluegill provided by the 50th anniversary committee. Each derby participant received a goody bag filled with candy, snacks and fishing supplies. Over a dozen bass, 12 to 13 inches in length were caught.

The Moraine Airpark was the site for another fantastic special event, the Flying Heritage Festival, held on a cloudless August 8th hosted by EAA Chapter 48 and the Moraine Airpark. Over 50 classic, vintage pre-1955 airplanes and over 10 cars/ trucks were on display. Antique vendors and the Wright Seaplane Base historical group had booths. The popular EAA pancake breakfast and lunch provided by food trucks kept the large crowd filled with delicious food. The 50th anniversary committee provided dash plaques to the first fifty plane or car participants.

Water related comedy reigned as the 50th Anniversary Cardboard Boat Regatta kept the crowd laughing on August 29th at Deer Meadow Park. Six homemade boats made of only cardboard and duct tape competed on the 75 yard course to sail or sink. Many creative cardboard boats tested the waters with boats built and/or crews dressed in themes ranging from moo cows, to Duck Dynasty to Gilligan’s Island to the Roman Empire. Awards were given for best times, best dressed team, best theme and best boat design.

The 50th Anniversary Committee partnered once again with the Kettering-Moraine and the West Carrollton Branch Libraries to hold “Moraine Reads”, a reading challenge for youth and teens. Youth in third grade and under were challenged to read (or be read to) 50 books in 60 days. Youth in grades 4 through 12 were challenged to read at least 10 minutes for 50 days during the 60 day period. Each reading participant received a special 50th Anniversary bookmark to track progress. Participants completing 25 days of reading received a commemorative flashlight key chain. Those reaching the 50 days of reading milestone received 50th Anniversary ribbons and t-shirts. Overall, 62 youth earned “25 day” reading awards and 19 youth received the “50 day” reading awards.

In the month of September the Wright Seaplane Base Organization partnered with the 50th Anniversary Committee to sponsor the “Wright Seaplane Base Coloring Contest” for ages 4 through 12. The goal was to promote artistic skills in youth and to educate them on the history of the Wright Brothers flying seaplanes on the Miami River in Moraine and West Carrollton in 1913 and 1914. Over 85 coloring contest entries were received with winners receiving certificates and restaurant gift cards at the City Council Meeting on October 23.

The 2nd Annual Gravity Games was held on September 12 on Main Street Hill. The 50th Anniversary Committee enhanced the event by supplying prize money for the category winners, best vehicle theme/design prize money and race awards. Tommy Watts, Jerry & Chris Dunn and Craig Richardson organized and administered the event with the help of committee volunteers. Ten creative 3 or 4 wheeled homemade vehicles of various design raced down the hill in this hilarious competition, much to the delight of the crowd.

The 50th Anniversary “Fall Fitness Challenge” was held from October 1 through December 30. PRC members were challenged to work out 50 out of 90 days. Participants achieving the goal would win a free t-shirt and water bottle with five achievers winning free PRC memberships and one person winning a FitBit.

The Moraine 50th Anniversary Committee and the Moraine Rotary Club each donated $250 to the Moraine Parks & Recreation Department to purchase “50” soccer balls which were given to school age children at the Moraine Community Halloween Party on October 31 at Wax Park.

During the month of November nine Moraine restaurants participated in the “1965 Restaurant Throwback Day” in which they offered a 1965 priced menu item, an item at 50% off or an item at a special rate. Dixie Dairy Dreem, Moraine Fish & Chicken, Moraine Subway, Ron’s Pizza, Voltzy’s Rootbeer Stand, Vinny’s Bar & Grille & Moraine Fazoli’s participated.

On Thanksgiving morning, November 26, the Zumba Fitness “50th Anniversary Blowout Class” was held at the PRC. Not only did the free event give the class participants a chance to work out and burn calories before that big turkey meal and provide canned goods donated by the participants for food baskets for needy families for Christmas, but the event was enhanced by the 50th Anniversary Committee providing free t-shirts, water bottles, a $25 gift card to Kroger for the best “1965 Dressed Workout Outfit” plus a six month PRC membership. A total of 31 women participated in the class.

The annual Christmas Tree Lighting Ceremony took place on Friday, December 4th at the Moraine Municipal Building. In addition to Christmas cookies and refreshments, West Carrollton High School students providing music, the arrival of Santa Claus and a fabulous light display, the 50th Anniversary Committee enhanced the event by hiring a balloon sculpturer who made festive holiday balloons for every child in attendance.

The final event celebrating the City of Moraine’s 50th birthday was creation of a Time Capsule of the 2015 events as well as some select City memorabilia. City Planner Mike Hammes organized the collection of documents which will be finalized by February of 2016 with the intent of being revealed 50 years from now in 2065.

Thanks to everyone who supported our 50th Anniversary

Due to the wet weather forecast for this weekend, we are rescheduling the Gravity Games for October 23 at 10a ... See MoreSee Less

We are disappointed but understand. Don't want to race in the rain for sure.

Due to the wet weather forecast for today, we are cancelling the Deer Meadow Park clean up scheduled for this evening. ... See MoreSee Less

If you are interested in having a booth at Boo Bash, please fill out our Vendor App before Wednesday, September 29. ci.moraine.oh.us/boo-bash/ ... See MoreSee Less

Pavement milling will begin on Vance Road and proceed to Pinnacle Road and Pinnacle Ridge. Paving operations are expected to begin on Friday and last through Tuesday, September 21, 2021 (weather permitting).

Please expect delays and take alternate routes, if possible. Thank you for your patience as we make these much needed improvements. ... See MoreSee Less

September 11, 2001 is a day worth remembering. Thousands of Americans died in a terrorist attack on our nation and it’s a day to honor their lives. It’s also a day to show that we will never forget the horrific events that occurred on 9/11. ... See MoreSee Less

Trash will be picked up Saturday because of the Labor Day Holiday ... See MoreSee Less

The City of Moraine is hiring in several departments: Administration, Police, Fire, Parks, Maintenance and Streets.

Paving is underway in the southern portion of the Haverstick plat. Work should be complete by this Friday. ... See MoreSee Less

Please do the bike path around the civic center too!

It'd football season let us get you to and from your game or favorite sports bar. We also offer transportation to many other destinations, Dr appointments, casino, grocery, school, shopping and more www.facebook.com/DMTransportationllc/