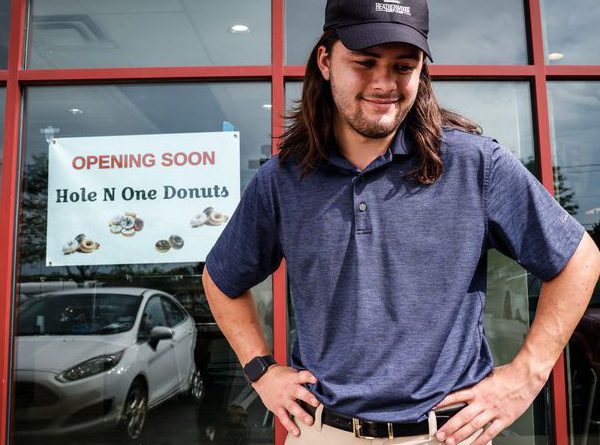 A 19-year-old who has spent most of his teens in the doughnut business will soon take a swing at his own.

Luke Lawrence, who plans to launch “Hole N One Donuts” at 2739 W. Alex Bell Road in Moraine in mid-October, moved to Springboro in 2016 and found work at The Donut Haus in Springboro via its then-owner, nearby neighbor Mike Hemmert. Lawrence said he folded boxes for four months in eighth grade, working three-hour shifts after school and on weekends.

He worked his way up the shop’s career ladder over the years, progressing from doing dishes and cleaning at first to applying icing to and filling doughnuts and serving customers. Getting his license at 16 years old allowed him to work night shifts and eventually become the night shift manager.

Lawrence said he found inspiration in then-Donut Haus employee Ryan Tripp, who started Bear Creek Donuts in Miamisburg in 2016 and then purchased The Donut Haus from Hemmert in early 2018, promoting Lawrence to baker and then manager.

“Once he took over The Donut Haus, he kind of became a mentor,” Lawrence said. “He had always talked about adding more locations in the future and I was like ‘Well, I’ve done this for so long, I like doing it, I like the people that are in it (and) I learned the business with him. He is 10 years older than me … he is like a big brother to me, helping me through everything.”

The two share a similar entrepreneurial path: Tripp worked for Hemmert at the Donut Haus starting at 14 and purchased the shop eight years later.

The 1,000-square-foot Hole N One Donuts gets its name from Lawrence being an avid golfer who has played for the high school varsity team for four years. The new shop will be laid out very similar to the well-received Bear Creek Donuts.

It will offer not only a wide variety of doughnuts, but also muffins, cookies, turnovers and other baked goods, Lawrence said. Limited seating of about four to five tables will be available inside the shop, which will be open from 6 a.m. to about 3 or 4 p.m. daily.

Lawrence said he loves the shop’s location because of its proximity to Kroger and Meijer, as well as the neighboring city of West Carrollton.

Hole N One Donuts will be a family affair, Lawrence said. His father, John, has a background in construction background and together, the two of them are completing 95% of the interior build out. Lawrence’s mother, Christina, will side manage the business and work alongside him when the shop opens.