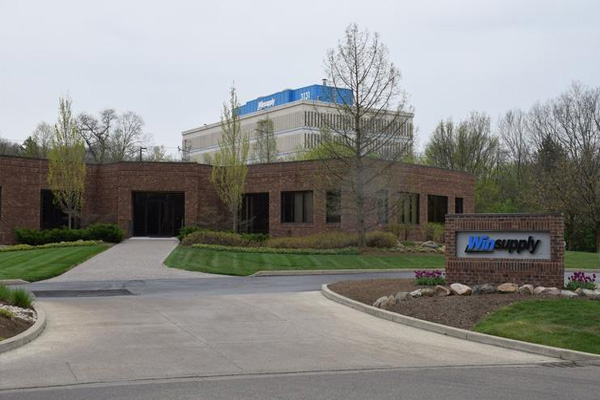 One of the region’s most prominent companies has broken ground on a building that will serve as a training facility and the new home of its Dayton-area operation.

Winsupply Inc., a nationwide distributor of construction and industrial equipment, is building the “Richard W. Schwartz Center for Innovation” at the corner of Kettering Boulevard and Big Hill Road, which is located on 6.8 acres near its headquarters in Moraine. Winsupply broke ground on the 28,000-square-foot building today, Sept. 23.

The Center for Innovation will serve as a local training facility for Winsupply Support Services employees. It also will pilot and finalize support services for the company’s 600 distributor locations.

In addition, the center will become the new home of Winsupply of Dayton — the company’s local distributor that serves plumbing contractors. It will move from its current location at 427 Washington St. in summer 2021.

“Innovation has long played an important part in Winsupply’s success,” Winsupply President John McKenzie said. “Our chairman, Rick Schwartz, spearheaded automation at Winsupply with our first IBM computer system not long after he joined the company in 1972. He led the development of our enterprise resource planning system that every Winsupply location uses for order processing, accounting and financial reporting, inventory management, and so much more.”

McKenzie continued, “We named this the Richard W. Schwartz Center for Innovation because of the legacy Rick created at Winsupply in advancing the way we do things, making it possible for our distributor locations to work efficiently and serve their customers as the best in the industry. This facility continues his heritage of finding new ways to automate and grow our company.”

Schwartz, former CEO and current chairman of the board at Winsupply, acknowledged the honor during the groundbreaking.

“I want to thank the executive leadership for naming the facility in the spirit of what I believe in,” Schwartz said. “This training company is something I’ve been advocating. The ability for our support services teams to work side by side with an operating local company will be invaluable and will actually help speed up the time to market for our newest services.”

Winsupply currently employs some 250 people at its adjacent campus in Moraine, which is located at 3131 S. Kettering Blvd. and 3131 S. Dixie Drive. Employees at both facilities play a key role in the success of Winsupply’s 600 operating companies nationwide by offering back-office support services. These services include capital and financial resources, management consulting, sourcing and logistics, e-commerce, information technology, accounting, payroll and more.

“Having the capability to work side-by-side with Winsupply of Dayton, an actual operating company, allows them to obtain real-world feedback from the local distributor employees using their services in real time,” McKenzie said. “We will be pioneering our most innovative services in the early stages here.”

Winsupply is one of the Dayton area’s largest businesses, employers and fastest-growing companies, according to DBJ research. The company’s revenue was $3.92 billion in 2019, up 7% from the year prior.

Winsupply acquired two businesses and launched six new locations in 2019, adding to the growth it has experienced over the last few years. Already in 2020, the company has inked four acquisition deals, bringing the total number of locations to over 600.

With strong revenue growth and an expanded footprint, Winsupply achieved record sales in 2019.

Winsupply is a privately held company with more than 600 wholesaling locations in 45 states. It has more than 400 local employees working at its headquarters, distribution center and operating locations, and 6,900 employees nationwide.