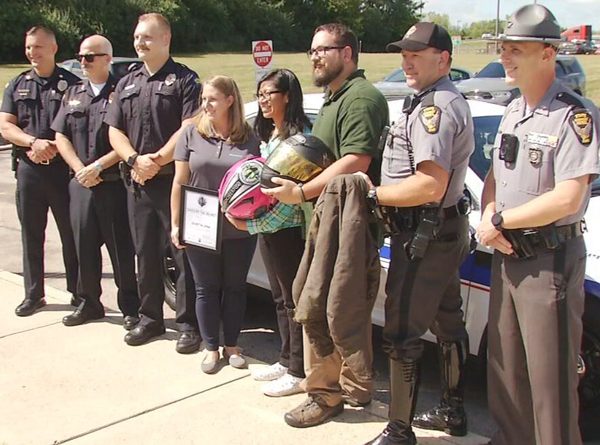 An award recognizing motorcycle riders who survive serious crashes while wearing a helmet was presented to one rider on Wednesday.

Motorcycle Ohio, a division of Ohio Traffic Safety Office is giving Julietta Lifka of Brookville a “Saved by the Helmet” award. This year alone, Lifka is the 19th recipient of this award, with 25 awards presented in 2021, according to Michele Piko, state program coordinator, Motorcycle Ohio.

Lifka crashed into a concrete barrier while riding her motorcycle on Interstate 75 in Moraine on July 13. The crash happened when she swerved to avoid a semi-truck that merged into her lane. Lifka was thrown from her motorcycle, and tumbled 50 feet down the highway. She was able to walk away from the crash with only minor injuries, because she was wearing proper safety gear, including a helmet.

Lifka was presented a certificate of recognition and new replacement helmet. She said the crash hasn’t deterred her from riding her motorcycle.

“I’m ready to get back on,” said Lifka. “I think because the end result was so good that I didn’t break anything or seriously get hurt. I think that’s why I’m less intimidated to jump back on a bike.”

Safety officials in Ohio hope that acknowledging riders who wear protective gear will help to promote and increase awareness of the life-saving value of motorcycle helmets.

“I think if she wasn’t wearing the right gear, it could have been a lot worse,” said Officer Watson of Moraine Police Department.

“We don’t want anyone to lose a loved one,” said Piko. “They make such cool helmets nowadays. So there’s no excuse, wear the gear go home to your loved ones, because they’re expected to be home when your home.”

Ohio has more than 400,000 registered motorcycles, 600,000 endorsed riders, and issues 40,000 motorcycle permits per year, according to a news release.

To learn more about Motorcycle Ohio visit this link.