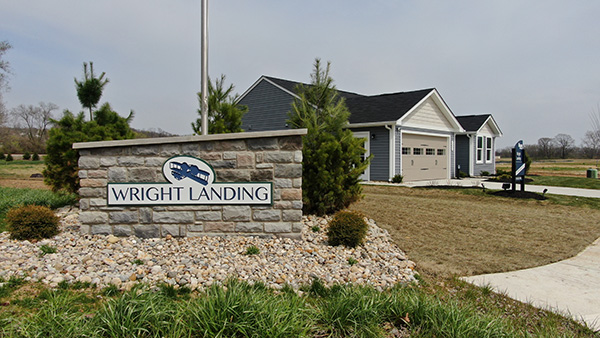 Both subdivisions were offspring of a unique partnership between Ryan Homes and the city of Moraine, or a New Community Authority (NCA).

Eligible jurisdictions, under the NCA rules, are able to use specific property tax revenues for paying off bond debt incurred for infrastructure costs related to new developments. In turn, Moraine was able to pour nearly $8 million in infrastructure costs, such as building roads and sidewalks along with installing water and sewer systems.

For Moraine city officials, the New Community Authority partnership allowed for a low-cost, low-risk opportunity to pique the interest of developers to make investments in Moraine. Michael Davis, Moraine’s city manager, believes that Pinnacle Ridge and Wright Landing are proof that they “exceed all expectations.”

“Going forward, the city is happy to welcome further development,” Davis said. “However, due to our proven track record and the current market, we believe it is best for future projects to be more private developer driven or a hybrid public-private partnership. We’ve shown that there is little risk involved, especially with the current status of the market.”

The first lot in Pinnacle Ridge sold in 2018, for around $170,000, with a bulk of sales occurring over the past two years. When available today, lots usually average $200,000 with some even as high as $225,000. Price increases on these homes have occurred even prior to the lumber and labor shortage causing rising prices and delays in home construction, Davis said.

Wright Landing homes, similarly, are expected to sell for similar prices to Pinnacle Ridge homes, around $200,000. These homes, however, are usually smaller at one level around 1,800 square feet with three bedrooms and two bathrooms. Their proximity to the water table, or the upper level where the ground is saturated below, however, prevents them from being able to have basements.

“While you might not have a basement, you have water from one of the best underground reservoirs in the country right here in the Dayton area,” Davis said.

Nearby amenities, such as the 40,000-square-foot Payne Recreation Center, have influenced homebuyers to take the plunge, city officials say. The center boasts an indoor walking and running track, weight rooms, and meeting rooms that can hold up to 100 people.

For Pinnacle Ridge residents, to the north, Pinnacle Park and the Charlotte Mills playground are available nearby. Wright Landing residents are near Frank Nicholas Elementary which, though closed, has a playground available to neighborhood children.

Homes sales, furthermore, are not limited to simply new developments.

Heritage Estates, a subdivision that sold its first home in 1988, sold three to four lots within the past year and older homes vacated by those moving to newer subdivisions have continued to be sold over the past year.

Vacancy rates, city officials say, have remained stable over the past few years despite the surge of residents upgrading to newer homes.