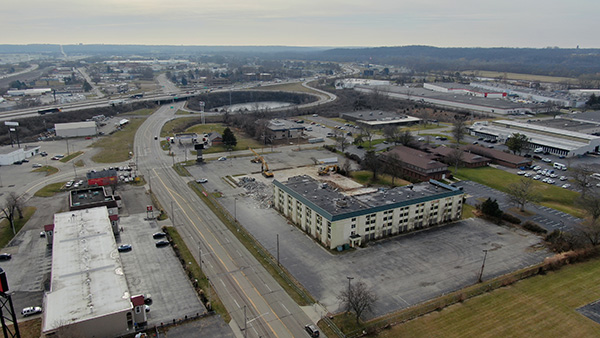 Renewed interest from investors and the growth of existing businesses has spurred Moraine to make a concerted effort to reinvigorate the northern quadrant of the city.

“It really needed to be done for quite some time, but the way the grant cycle fell we weren’t able to secure both in the same year,” Moraine City Manager Mike Davis said. “But the good news is we were able to secure additional grant dollars by putting it off for a couple years, which will be a benefit to our citizens and our businesses. The complete resurfacing of Dryden Road north has excited a lot of folks making investments up there.”

One of those investments was in the former Knight’s Inn hotel that was rehabilitated as a Red Roof Inn by current owner Jerry Dehner. The $1.5 million investment included a complete remodel, from the exterior facade to each individual room. The hotel has done “pretty well” since opening about a year ago, Davis said.

The Red Roof Inn project also inspired the demolition of a Holiday Inn across the street, which had become an “eye sore” and a hotbed for criminal activity, Davis said.

With the former Holiday Inn demolished, Davis said current owner Jay Bedi plans to erect a new storage facility on the site. Assuming the current timeline stays the same, construction will begin later this year on the estimated $2.3 million project.

“We were happy to work with Mr. Bedi to demolish the building, which really became a safety hazard and an eye sore,” Davis said.

In addition to these projects, several other businesses continue to make investments in the northern portion of Moraine.

The Surgery Center of Southwest Ohio, an outpatient facility that does not require overnight stays after surgery, revamped its entire front entrance of its Arbor Boulevard building. This included the front driveway where patients are dropped off and picked up.

“Now you can drive an ambulance up front and go right through the building, whereas before you had to park somewhere else,” Davis said.

Another company that has made a recent investment in northern Moraine is Insignia, a branding solutions provider that provides banners, building signage, apparel, vehicle wraps and more. Insignia is investing between $20,000 and $25,000 in renovations to its new building on Dryden Road. The company recently relocated the business and its nearly 20 employees from a smaller facility in Moraine.

Improvements to north Dryden Road are also benefiting existing companies such as AES Ohio, formerly Dayton Power & Light. One of the company’s corporate facilities sits on the northernmost portion of Dryden Road, where between 350 and 400 employees work.

Between infrastructure improvements and investment from the private sector, Moraine officials hope to continue catalyzing economic growth in the northern part of the city.

“What we’re trying to do is re-energize this quadrant a bit by putting some new aesthetics on it to bring it back to life,” Davis said. “We’ve had a lot of emphasis on Dryden Road south over the last couple years, so we wanted to make sure we were addressing both ends of Dryden Road. We think this will have a lot of benefits now and into the future.”