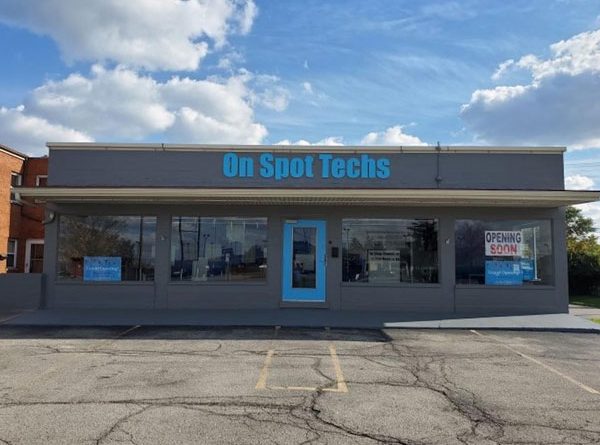 After being in business for nearly a decade, a local computer and IT services business is opening its first public storefront. The project will prompt new hires.

On Spot Techs, launched by Eric Geier in February 2012, will hold a grand opening Wednesday for the new shop, which is located at 4732 S. Dixie Drive in Moraine.

Since its inception, On Spot Techs operated out of Geier’s home — first in Fairborn and most recently in Vandalia — so only on-site services were provided at customer homes and small businesses throughout the Dayton and Springfield areas. But with this new location in Moraine, customers will now have the option to drop off and pick up devices in the shop or make in-store appointments for one-on-one help. There will also be new and refurbished computers for sale, plus accessories for computers and mobile devices.

Geier said he made the leap from an at-home business to a brick-and-mortar location in an effort to grow the company and provide a better environment to train, hire and manage employees.

“It also gives our customers more options to utilize our services and to check out the products we sell,” Geier said.

On Spot Techs also offers WiFi services for larger businesses nationwide under the trade name of “Wi-Fi Surveyors.” It provides RF site surveys for designing or troubleshooting large WiFi networks in office buildings, plants, warehouses and other venues. One recent project was with King County in the Seattle, Washington area, where the company designed the WiFi network for the region’s public transport bases.

Geier said he is excited to have his first brick-and-mortar location in Moraine, which will also better serve those in Kettering, Oakwood and other Dayton-area suburbs. He hopes to help even more residents with their computers, smartphones, tablets and smart TVs. For businesses, Geier says they will continue to share their passion for IT while at the same time increasing employee productivity and simplifying work processes for clients.

On Spot Techs’ normal business hours will be from 9 a.m. to 5 p.m. Mondays through Fridays at the new location, which is behind Frisch’s Big Boy near the intersection of North Springboro Pike, South Dixie Drive and Kettering Boulevard. The nearly 3,500-square-foot building, about half of which will be utilized by On Spot Techs, was most recently a Liberty Tax facility, and previously housed a carpet store, laundromat and donut shop.

Future plans for the site include evening and Saturday hours, as well as two additional hires. On Spot Techs currently employs two people in addition to Geier and his wife, Sierra, who co-owns the business. Sierra Geier also plans to open an emporium that hosts classes and sells local, hand-crafted products in a portion of the building.

On Spot Techs was founded by Geier in the hopes of helping others better utilize technology. He brings computer and IT expertise to the company from prior experience at several national tech support businesses and international consulting firms. Geier also is a freelance tech writer of nine computer and IT books, and has contributed to several other publications.