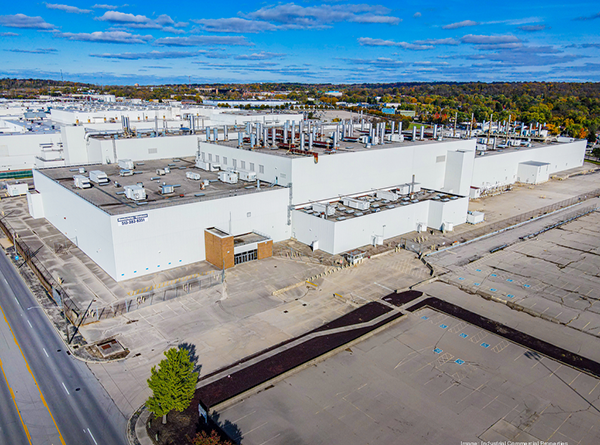 Nearly three years after work began, the final stage of the rehabilitation of the former General Motors assembly plant is anticipated to finish in early 2023.

Industrial Commercial Properties is restoring the former GM paint shop located on West Stroop Road. The 392,000-square-foot building, originally constructed in the 1990s, is across the street from the plant now owned by Fuyao Glass America.

While originally expected to be available for occupancy by end of 2021, ICP ran into issues that delayed the project for over a year. Construction was hindered due to the pandemic, staffing issues and supply-chain related problems.

ICP and Industrial Realty Group have partnered to own and develop the project. Work began in fall 2020 and included clearing out the building, installing lighting and heating, and removing the second floor to provide 42-foot clear heights for heavy industrial users.

There are no tenants committed to occupy the building upon completion yet, but ICP anticipates users to sign on in the fall.

“The overall vacancies in the market are low, and that bodes well for us being able to fill the building as soon as it’s ready. Thankfully, we think the market will be receptive to us,” said Dean Miller, senior vice president of leasing and acquisitions for ICP.

The facility aims to attract tenants who desire unique and heavy manufacturing requirements. The property will feature a new roof, around 500 parking spaces and 150 trailer spots. Restrooms, offices, docks and drive-ins will be built to suit.

“We think this is the best building we’ve activated to date. It’s the tallest, it’s got the best column spacing and it’s got the most utilities,” Miller said. “ICP constructed a plan to renovate nearly 4 million-square-feet at the GM plant and this is the last 10%. We saved the biggest for last, but it’ll be our best building.”

Michael Davis, Moraine’s city manager, discussed the hope the unique building and its amenities will attract tenants of all types.

“They’re removing the second floor which will create over 40-foot ceiling heights. That would make it one of five facilities in the entire state of Ohio that has that level of stacking and racking capabilities, which is going to put it at the forefront for opportunities of any industry,” Davis said.

“We’re really excited about the opportunities that it could bring in. There’s no comparative building in the Dayton region,” Davis said.

Revitalization of the former paint shop will achieve a major milestone in the redevelopment of the former GM Moraine Assembly. All the building space is now filled except for the paint shop, so upon completion, the prior GM plant will be 100% occupied again.

The former GM campus is primarily occupied by Fuyao Glass America, which owns and leases more than 1.5 million square feet. The property has garnered more than $700 million in overall capital investment and created more than 2,300 jobs since GM left in 2008.