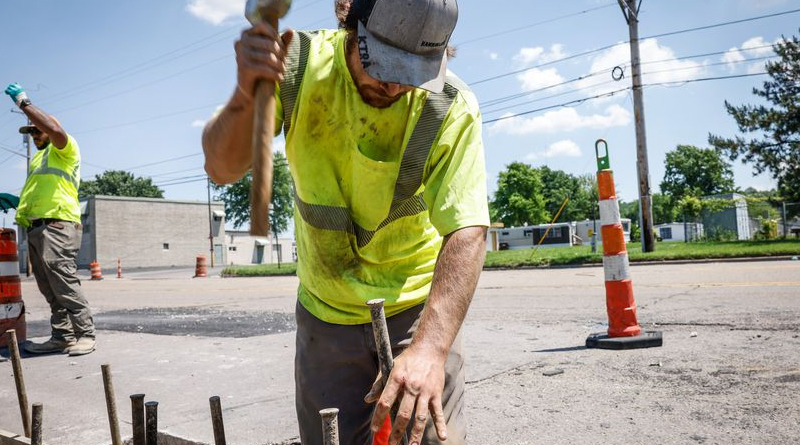 Moraine is gearing up for a summer project designed to make driving the city’s roads a smoother endeavor and recently approved two more projects aimed at doing the same in 2023 and 2026.

Construction being carried out now on Dryden Road is just base repair and not the final product, according to City Engineer Alisha Burcham.

“The purpose of that is so we can replace the parts we had to fix all the way to the gravel base, drive on it for a little bit, see what’s going to settle and then we’ll finally pave that probably this month,” Burcham said.

The final pavement, slated to start later this month, will resurface Dryden Road from Kreitzer Road to the Great Miami River.

The city also is carrying out curb repair just north of Kreitzer Road, installing a sidewalk and other elements, she said. “That work is moving along very quickly,” Burcham said.

At Moraine City Council’s most recent meeting Thursday evening, council approved a Kettering Boulevard project at a cost of nearly $1.4 million. The Ohio Department of Transportation will contribute 60% of eligible costs ($837,575) and Moraine will contribute an amount not to exceed $558,384.

The project includes improvements on Kettering Boulevard from Hoyle Place to the Moraine north corporation limit and Kettering Boulevard from West Stroop Road to Ohio 741. The road roadway resurfacing will include isolated curb replacement, concrete pavement repair, and isolated partial-depth pavement repair. Engineering for this project is expected to begin in early 2023. Construction and completion of the project are expected in 2026.

The Kettering Blvd project is a complex project, as reflected in its long timeline, Burcham said. The project will need engineering design work for upgrades for radar detected traffic signals, concrete pavement replacement, and curb repairs.

“One may drive this road and think ‘Does it really need (to be) resurfaced yet?’ and the short answer is ‘No, not yet,” but by 2026 this answer will be a resounding ‘Yes,’” she said. “This advanced planning with securing grant dollars will help the city to plan for and execute a large project with fewer city income tax dollars when the time is right.”

City council on Thursday also approved a South Dixie Drive resurfacing project at a cost of $340,408. ODOT will contribute $234,707 and Moraine will contribute an amount not to exceed $105,701.

The project would resurface South Dixie Drive from Ohio 741 to W. Stroop Road. Resurfacing will include partial depth replacement of the entire surface and pavement markings. Limited full depth pavement repair will also be included as needed. Engineering will take place this year with construction and completion set for 2023.

The project is a simple resurfacing project that will utilize the coronavirus relief aid that was rolled out through Miami Valley Regional Planning Commission, Burcham said.

“This resurfacing will give new life to South Dixie Drive after the construction traffic required to complete the new West Carrollton School Building,” she said. “This smaller project will prevent the need for a larger, more expensive project in the future and extend the useful life of this arterial roadway.”

These grant projects on arterial roadways allow me to direct our “local paving dollars” from city income tax funds to residential streets and really get more bang for our buck to maintain our infrastructure.