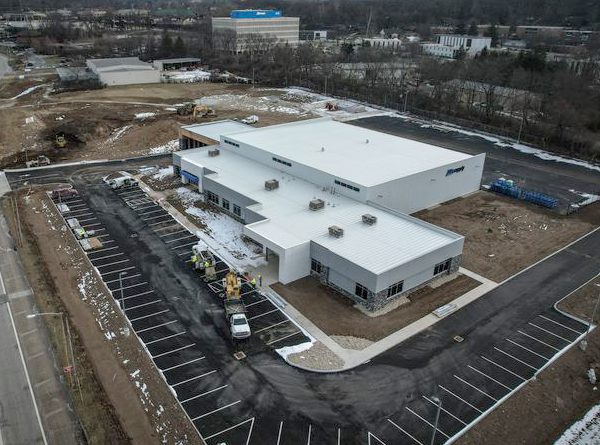 One of the Dayton area’s largest businesses, employers and fastest-growing companies saw extensive growth in 2021.

“That’s probably the most we’ve opened in over 20 years,” said Rob Ferguson, president of the Winsupply Local Company Group for Winsupply Inc.

Winsupply is in the business of construction wholesaling, every day supplying thousands of different products to contractors and installers nationwide. It shares risk and equity with partner companies, more than 650 of them in 45 states.

The company has 7,600 employees nationwide, including more than 400 throughout the Dayton area, more than 300 of them at its Moraine campus.

Construction on Winsupply’s Richard W. Schwartz Center for Innovation in Moraine is “moving along quite well” after supply chain problems created some slow downs, according to Bill Tolliver, Winsupply vice president for real estate services and in-house counsel.

Located at the corner of Kettering Boulevard and Big Hill Road in Moraine, the 28,000-square-foot building will serve as a local training facility for Winsupply support services employees from two adjacent campus buildings.

“It’ll be a great model for our local companies,” Tolliver said. “The ability to have folks from the support services campus that create products and services for our local companies to be inside the company and see how their ideas and innovations play out in real time before we push them out to the rest of the 650 companies, I think that that will be a great advantage that this facility will create for us.”

Ferguson said the company will put the “very successful” Winsupply of Dayton into the innovation center to show what a local distributor looks like, and to bring people around the country into the center to highlight innovations that are being created to help their businesses become more efficient and profitable.

“We have a waiting list of folks here at the services campus that are wanting to put what they’ve been working on into this new company,” he said.

Naming of the new facility is a tribute to well-known Dayton businessman and philanthropist Richard Schwartz, Winsupply’s chairman and its former president and CEO.

Winsupply in 2021 accrued more than $5 billion in revenue, more than $1 billion than the previous year, Tolliver said.

“That growth came from same store and new company growth, so it was very organic,” he said. “Our local companies are getting bigger, stronger, faster on an annual basis.”

The company’s success over the past couple of years, especially during the disruption of the pandemic, is a tribute to the individuals that run Winsupply companies nationwide, Tolliver said.

“Everything that we do here in Dayton exists to support them, so we want to make sure that … they receive the credit for the amazing work that they’ve done … to grow $1 billion inside of a pandemic,” he said.

Last year also saw Winsupply make seven acquisitions, including companies in Ohio, Pennsylvania, North Carolina, Massachusetts, Iowa, Georgia and Texas, all of which were “very strategic” in regard to their location, Ferguson said.