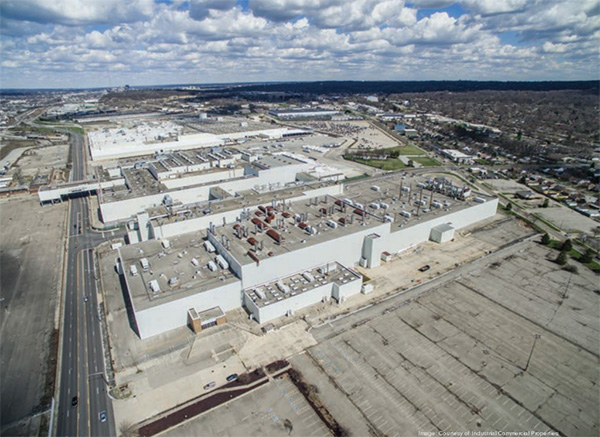 The final piece of the former General Motors assembly plant in Moraine is expected to become available for occupancy by the end of 2021.

Industrial Commercial Properties is in the midst of rehabilitating the former GM paint shop on West Stroop Road. The 392,000-square-foot building, designed in the mid-1990s as a $155 million automated SUV painting facility, is immediately across the street from the plant now owned by Fuyao Glass America.

ICP began site work at the property in fall 2020. The Solon-based developer is cleaning out the building, uninstalling equipment and removing the second floor to provide 42-foot clear heights for one or more heavy industrial users.

“It’s a strong candidate for a manufacturer,” Dean Miller, senior vice president of leasing and acquisitions at ICP, told me. “We think it will be one of a kind — or one of a small handful — of what we would call true manufacturing buildings in this state and region.”

But that’s not the case with the paint shop, which was designed with heavier uses in mind.

“It’s taller than anything being built at the Dayton Airport, and there’s approximately 40 megawatts of power capability inside the building,” he said. “We’re just fortunate that we have a resource in Moraine that has these capabilities built into it.”

The rehabilitated facility will feature a new roof, about 500 auto parking spaces and 150 trailer spots. Offices, docks, drive-ins and restrooms will be built to suit, and the building has potential for build-to-suit rail access as well.

“We don’t know for sure who will come along to lease or buy the building, but we know it has the potential to serve unique manufacturing requirements,” Miller said. “That puts us in a fairly small group of competitors, and it makes us excited.”

Mike Davis, Moraine’s economic development director, said the project could accommodate a range of end users, including companies that require high racking or extended products, like towers or utility structures.

“ICP has a wonderful history of being able to modify these brownfield sites and realize the vision of a new candidate,” Davis told me. “This (project) is going to put us at the forefront when the right user comes along.”

The paint shop property can accommodate either a single large tenant or multiple small- to mid-size tenants with a minimum divisibility of 75,000 square feet.

“In its best possible outcome, I think it would probably be a single-tenant building,” Miller said. “Those uses tend to be fairly employment-heavy with good jobs, and they usually stay a long time. But what actually happens in the building will be a function of who needs space at the time we’re offering it.”

Revitalizing the former paint shop is a “significant investment” for ICP, Miller said. It’s also a major milestone in the remediation and redevelopment of the former GM Moraine Assembly.

“All the building space there is either filled or reconfigured except for this paint shop,” Miller said. “If we get this building filled and done, that will effectively mean the prior GM plant would be 100% occupied.”

The remaining asset at the former GM plant is developable land. The property is located on a 380-acre site, and about half of that acreage is not occupied by buildings — including shovel-ready parcels along Ohio 741 across from Fuyao and at the former Harrison Radiator Corp. site on Dryden Road.

Miller said ICP would like to connect with buyers and developers interested in using the remaining land for new construction.

Today, the former GM campus is primarily occupied by Fuyao Glass America, which owns and leases more than 1.5 million square feet and is currently working on a $46 million expansion. Another 550,000 square feet is leased by other industrial tenants.

The property has garnered more than $700 million in overall capital investment and created more than 2,300 jobs since GM left in 2008.

“It’s pretty amazing to begin with something where you had a completely empty ghost town, and then to have it fully occupied, reinvested in and have 2,000-plus people working there,” Miller said. “The money part is fun. But to be able to do something like that and help bring a community back, that feels pretty good, too.”