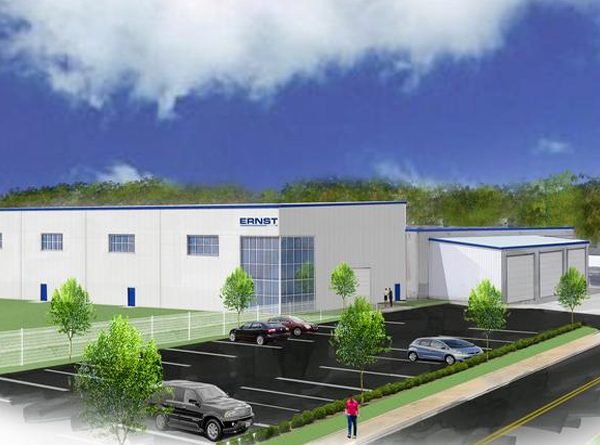 A manufacturing company is getting ready to embark on a significant expansion project at its Dayton-area plant. And if a large contract comes through, the manufacturer will look to expand again in the near future.

Ernst Metal Technologies LLC, a global supplier of metal stamped and formed components focused mainly on the automotive industry, will soon break ground on a roughly 24,000-square-foot addition to its plant at 2920 Kreitzer Road in Moraine. The project represents a $7 million to $8 million investment, and will result in five to 10 new employees.

“I’ve been with the organization for five years now, and this is the most significant investment we’ve made,” Ernst Metal Technologies President Jim Burt said. “It speaks a lot to the ownership who are making moves to grow.”

The addition, which is being built by Ferguson Construction, will make room for a 1,000-ton press machine that will allow Ernst to produce larger components than it does today. Currently, Ernst’s largest press is 800 tons.

Burt said the need for a larger machine resulted from increased demand from its customers in the automotive industry, as well as the desire to have redundancy for current products.

“We need to make sure we don’t have any issues supplying products to the automotive industry,” Burt said. “It also gives us some redundancy, and the machine has new technology that will allow us to be more efficient and also offer new products as well.”

Burt said the expansion to the company’s current 100,000-square-foot facility will also provide Ernst with additional capacity for smaller tonnage machines and higher speed machines, which will likely be installed in the next couple of years.

“It also gives us additional footprint to restructure the flow of materials, which will provide some efficiency gains as well,” he said. “We’ll have 20-ton crane capacity, which is a single crane for the whole bay. That will make our operation more efficient.”

Site preparation for the expansion will begin Aug. 8. After that, Ernst will have a ground breaking ceremony to celebrate the project. Construction will take somewhere between eight and 10 months, and during that time the press will be ordered.

The expansion comes as Ernst is seeing a rebound from the Covid-related downturns that affected the automotive industry over the last two years. Though the industry is bouncing back, the pandemic struggles caused the company to re-examine its business strategy. While Ernst will continue to operate primarily as an automotive supplier, it has also expanded into battery vessels for the energy industry.

“Ernst made the strategic decision to start to pursue non-automotive business,” Burt said. “We were recently awarded some new business in the battery vessel market, and so we’re starting to do a lot of quoting in that arena. Automotive will always be a significant part of what we do, but having some diversification will allow us to moderate our business a little bit. It’s really about protecting the livelihoods of our employees and making sure we’ve got stable work.”

Buoyed by the pre-Covid increase in automotive work and expansion into the battery vessel business, Ernst is roughly 25% above its projected growth this year. And that number is likely to grow as the company is quoting what Burt described as a “significant contract” that would require the addition of around 90 employees.

Burt said he couldn’t go into much detail given the contract is still in its infancy, but he noted it would require Ernst to embark on another expansion in addition to new employees. If the contract comes to fruition, the manufacturer would add another 20,000 square feet to its Moraine plant. That would result in an increase of roughly 45,000 square feet between the two phases.

“We already own the land, so we have the ability to build onto this first phase,” Burt said. “To expand and build on the remaining footprint we have here is certainly what we see in the future, both in terms of our facility and employees. We see a lot of opportunities in the future, so it’s exciting.”

Ernst Metal Technologies is part of the Ernst Group, a Germany-based company that produces metal components. The manufacturer specializes in metal forming and post-stamping machining, as well as laser-welded assemblies. In addition to its Germany headquarters and U.S. operation in Moraine, Ernst has sites in China and France. It has more than 750 employees worldwide, including around 110 local workers. The company’s sales reached nearly $126 million (USD) in 2021.