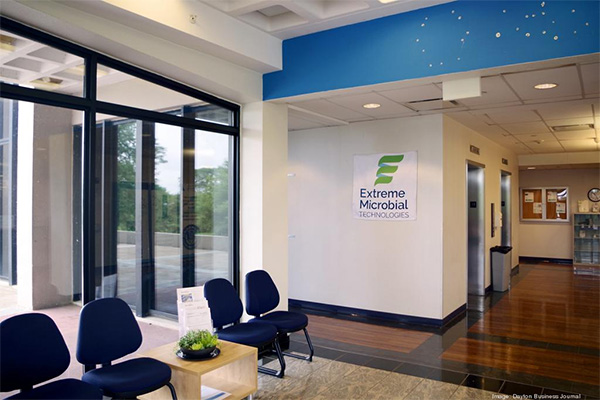 After sitting vacant for nearly three years, the former Dayton-area branch of Brightwood College has a new tenant.

Extreme Microbial Technologies (EMT), a local company that produces filtration technology to monitor and prevent airborne microbes and pathogens, moved into its new headquarters at 2800 E. River Road in Moraine in early May.

The building previously housed Brightwood College — a system of for-profit colleges owned and operated by Education Corporation of America. The now-defunct institution closed in December 2018 after losing its accreditation from the U.S. Department of Education.

After Brightwood’s exit, most of the building’s infrastructure — and even the furnishings — were left intact. The facility was outfitted with ICU rooms, labs, offices and HVAC equipment, making it an ideal spot for EMT’s engineering, testing and validation operations.

“”We’ve been using it as a playground,” Mount told me. “Everything was already here, so we just made it our own. It’s a lab for us.”

EMT occupies the lower level and most of the first floor. It shares the building with Mount’s other company, Ram Restoration.

EMT has been on an aggressive growth spurt since the start of the pandemic, installing its technology for a host of commercial clients in the Miami Valley. The company has begun expanding internationally too, quoting major contracts for businesses in South America, Europe and elsewhere.

“People are wanting to make a difference in the air that we breathe,” Mount said. “That was never a thing (before Covid-19). There was never a return on investment to protect people.”

Surging demand in the U.S. has prompted EMT to engineer more tailored solutions, Mount said. The company is designing custom units for Navy ships, car cabins and the RV market — the latter of which will be prototyped, built and tested later this summer.

“I really think August is going to be a breakthrough month,” Mount said.

“I’m always looking at how we’re going to fund the next step,” he said.

EMT currently has about 20 full-time employees, a network of contract manufacturers and roughly a dozen distributors across the country. The company recorded about $3 million in revenue in 2020.

Based in Moraine, Extreme Microbial Technologies installs air purification systems to prevent and monitor microbes and pathogens. Its technology pulls air through a HEPA filter and passes it through extremely small concentrations of hydrogen peroxide plasma, producing millions of ionized clusters that purify the air to remove environmental contaminants.