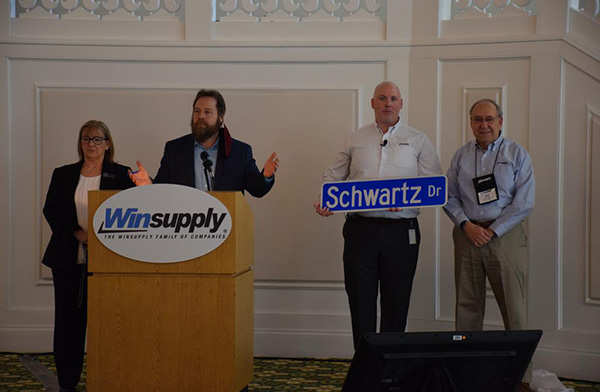 Winsupply Inc. has expanded its footprint across the country, with operations in 45 of the 50 U.S. states. But despite the company’s national growth, one thing has remained constant — its commitment to the city of Moraine.

One of the nation’s largest distributors of construction and industrial supplies and equipment, Winsupply has invested in Moraine even as the company has planted roots in other parts of the country via acquisitions and new business ventures. Winsupply’s latest investment, a nearly $6 million project, will mark the company’s fourth building on its Moraine campus.

In September, the company broke ground on the Richard W. Schwartz Center for Innovation. The 28,000-square-foot building will serve as a local training facility for Winsupply Support Services employees. It also will pilot and finalize support services for the company’s 600 distributor locations. In addition, the center will become the new home of Winsupply of Dayton — the company’s local distributor that serves plumbing contractors.

The new innovation center is expected to open in the first quarter of next year.

“We’re honored they continue to keep their growth local,” Moraine City Manager Mike Davis said. “We will continue to enhance our relationship any chance we get. The activity and investment you see today is a testament to their commitment to Moraine.”

“Having them invest in the area signals to us they are in for the long haul,” Hammes said.

To show their appreciation to Winsupply, the city renamed a street in honor of Schwartz, the company’s former CEO and current chairman of the board. Formerly Big Hill Road, the street is now called Schwartz Drive. New signage was installed in April following approval by Moraine City Council in March.

Davis said they surprised Schwartz by presenting him with the street sign at a Winsupply shareholders meeting.

“We thought it was the least we could do to show our appreciation,” he said. “His loyalty to Moraine and the Greater Dayton region is unwavering.”

Winsupply President John McKenzie said the company was honored by the gesture.

“Winsupply is extremely blessed to have a strong partnership with the city of Moraine,” McKenzie said. “We could not be more humbled that city leadership decided to rename a street in honor of Richard Schwartz. Moraine is, and will continue to be, partners of our growth.”

For years, the city of Moraine has taken an active role in helping the company grow. The city has helped Winsupply find properties for its expansions, advocated on their behalf and helped connect them with individuals and resources that supported their growth.

“When it comes to major projects, Moraine city leadership has always been attentive and supportive,” McKenzie said. “Moraine leaders have shown wonderful support toward Winsupply, including our ever-evolving support services staff and local companies.”

Beyond their collaboration on the campus expansion, Winsupply even consulted the city about a property it purchased. Winsupply bought a property across the street from its campus, demolished an old building and are now contemplating what they’d like to do with the site. The city has been involved with those discussions, Davis said.

“They asked us what they could do that would fit in with what we’d like to see,” he said. “They don’t have any specific plans on that site as of yet, but the fact they asked us for our opinion says a lot about their willingness to collaborate.”

McKenzie said Moraine has supported Winsupply for decades, so they want to make it known the appreciation goes both ways.

“Thanks to city leadership, we have found Moraine to be the perfect place to continue expanding and investing,” he said. “I have no doubt that the Moraine and Winsupply partnership will continue to grow.”

Winsupply is one of the Dayton region’s largest businesses, employers and fastest-growing companies, according to DBJ research. The company’s revenue was $4.2 billion in fiscal year 2021, which ended Jan. 31.

Winsupply is a privately held company with nearly 620 wholesaling locations in 45 states. It has over 400 local employees working at its headquarters, distribution center and operating locations, and 6,900 employees nationwide.